Protecting trees on a development site requires understanding and collaboration - and a shift in attitude. 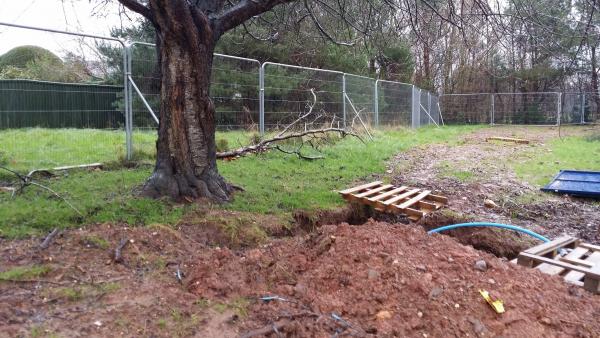 It is an unfortunate fact that trees are frequently damaged on development sites, most of the time unnecessarily and much of it illegally.

Most commonly, it is a tree’s roots that are harmed. While the least noticeable part of a tree to a construction team, roots are nevertheless its most vulnerable part – and especially so during a building project.

Vital feeding roots can be killed as a result of ground compaction, when heavy machinery, earth, or building materials are parked or stored too close to the base of a tree. Roots can also suffer from the leaching of toxic substances such as oils, cement or chemicals into the ground, and from trenching and excavation activity which can result in the severing of roots altogether.

Such damage undermines the roots’ ability to provide their trees with vital anchorage, water and mineral nutrients, or to act as a critical store of energy reserves for leaner times. Following a development, many nearby trees are left in need of remedial measures to attempt to restore them to reasonable health.

However, the damage is not always immediately apparent: it often manifests itself years later as poor growth, dieback and increased susceptibility to pests and diseases. Some trees are so badly impaired that they die before their natural time. Others are deemed unsafe and have to be removed, with the subsequent diminution of public amenity and the loss of the many benefits that mature trees can provide to both a site and to society at large.

By the time we see these more extreme consequences of development activity, however, the builders and developers have usually long departed.

It is then extremely difficult to prove conclusively any link between development activity, root damage and the ensuing poor condition of a tree.  Therefore, usually due to a lack of resources, Local Planning Authorities (LPAs) are generally unable or unwilling to initiate effective enforcement action against those who ‘probably’ caused the problems. Someone, then, has to foot the bill for restoration work, or for the removal of damaged trees on a development - either the homeowner, management company or taxpayer depending on who owns the relevant bit of land.

So what can be done?

In theory, trees are already protected by the planning system, for example by planning conditions or by Tree Preservation Orders. However, in large part because there is so rarely any comeback, such tree protection measures are often not implemented or properly adhered to.

The first step, then, must be to enforce greater adherence to any tree protection and aftercare conditions recommended by the statutory BS 5837 survey of a site prior to development. This requires that LPAs  better resource their tree officers so that they can have closer involvement with developments.

However, nothing will fundamentally change until developers become more willing to engage arboricultural consultants in the post-planning stage, when trees are most under threat. Developers’ teams, down to every last part-time labourer, must be made aware of the importance of adhering to the tree protection plan (TPP) –  many ignore the tree-related conditions of their planning permission simply through ignorance of the significance of activities such as parking a dumper truck under a tree for shade.

To further reinforce this outlook, trees must be repositioned throughout the development sector as service-providing infrastructure with a vital role to play in a development, rather than as an inconvenient constraint.

Local authorities, arboriculturists and many groups concerned with the future of trees in society are attempting to change the way trees are perceived by developers, and to increase the value of trees through law. See TDAG news story.