In putting together our Tiverton Town Tree Trail, we came across some historical nuggets and a few weird and wonderful stories - upside down tree, anyone? 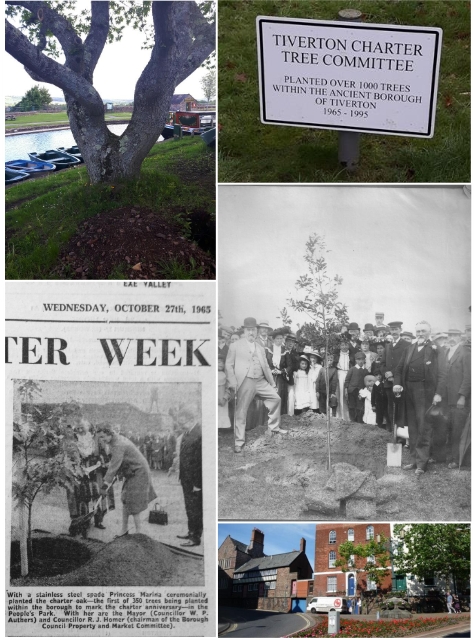 When we began work on our Tiverton Town Tree Trail, the lovely people of Tiverton - in particular volunteers at its Museum of Mid Devon Life - sent us lots of information, including some great history and background as to why Tiverton is such a green town. There were also some strange, folkloric tales that proved hard to validate but they are nonetheless fascinating stuff for anyone interested in our town's past.

The Tiverton Charter planting initiative provided the town with more than 1,000 new trees over 30 years up until 1995, many of which are hopefully still going strong - possibly including the charter oak planted by Princess Marina in 1965 in People's Park. The park was created partly from Govett's Field, named after a local dignitary, and a parcel of land belonging to Tiverton Castle. Another commemorative oak planting marked the tercentenary in 1904 of Blundell's School (pic middle right) - unfortunately no-one from the school was able to confirm whether it is still standing. Meanwhile, in the middle of the roundabout at the bottom of Phoenix Lane, we find three silver birches which were donated to the town in 1977 by the Soroptomists to celebrate the Queen's Silver Jubilee.

Then we come to the 'upside down' tree in the Grand Western Canal basin. The tree is a sweet chestnut (pic top left), and was planted in the late 1970s/early 1980s by Sidney Hawkins, a previous incumbent of the canal ranger's post, then known as a warden. For some reason known only to himself he planted it and immediately pruned it back hard, thus somehow curtailing the standard growth of its trunk and forming an unusual forked base - hence its nickname.

Meanwhile, careful when you're walking down Canal Hill at its junction with Exeter Hill to avoid any remnants of the Hangman's Tree. There was thought to be a curse on the poor tree and no contractor would touch it - but if you did need to make contact with it you were strongly advised to walk around it anticlockwise first. The Wishing Tree at the other end of Canal Hill as it becomes Newtes Hill was another oddity, with women spotted circling it and making wishes...perhaps in the hope of getting the bus to turn up?

Of course, if you're a knowledgeable Tivertonian and can enlighten us on any of these stories, or have a new tale to tell, please let us know!