Pests and diseases yet to come

In last month's round-up of tree pests and diseases we looked at those already here. In part II we look ahead to what dangers might be coming our way.

Plane wilt (Ceratocystis platani) is a looming threat – this time to our plane trees.

This is a wound parasite which rapidly infects plane trees, staining the xylem, causing disruption of water movement, cankers, sudden death of part of the crown, and eventually total death (typically within two to three years for a 30-40 cm diameter tree.) Infection typically occurs through fresh wounds, although trees can also transfer it via root contact. 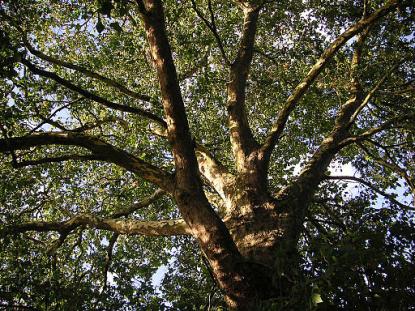 Originally from the south-east of the USA, it moved to Europe via military supplies during WWII, and has steadily spread across western Europe with devastating effect. It hit mainstream awareness when it was discovered in France’s UNESCO world heritage site, the Canal du Midi. The canal is lined with around 42,000 plane trees which are systematically being felled and replaced.

Additional precautions include sourcing plant material from regions free of the disease, and the disinfection of pruning tools and larger machinery. For now the threat seems to be contained – but the UK remains on high alert.

Photo: By Amandajm (Own work) [CC-BY-SA-3.0 (http://creativecommons.org/licenses/by-sa/3.0)], via Wikimedia Commons 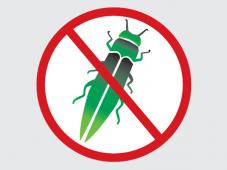 Another threat thought to have travelled internationally via wooden packaging crates is the emerald ash borer (Agrilus planipennis). It is usually spotted by the adult’s hallmark ‘D’ shaped exit hole – by which time the damage has already been done. When in its larvae stage, the borer feeds inside the bark of ash trees, creating serpentine-like channels as it goes. These ‘feeding galleries’ disrupt the flow of nutrients and water to the tree, effectively starving it to death within two to three years.

From its eastern Asian homeland, the beetle migrated to North America in the late 1990s. It was first identified in Detroit, USA, in 2002, then in Windsor, Ontario, Canada. It has since spread extensively throughout the continent, putting the 8.7 billion ash trees there under serious threat. Having already having killed tens of millions of trees, it has devastated the significant North American ash timber industry: the economic damage to the North American economy alone is expected to reach $10 billion by 2019. More recently, it has been identified in the vicinity of Moscow, from where it spreading west and south at a rate of up to 41 kilometres (25 miles) a year.

Attempts to stop the borer have included the release of parasitoid wasps, pesticides injected into the trunk or around the roots, and even electrified female decoys – but success has been limited. Not only is the borer a voracious breeder, but researchers recently (in October 2014) announced ‘with almost certainty’ that it has adapted to another host: white fringe tree (Chionanthus virginicus). White fringe tree is a US-native relative of the ash that grows extensively in the American wild. It is also popular in gardens precisely because it has historically been problem-free.

In the meantime, with our ash trees already suffering the impact of ash dieback, the UK certainly hopes the borer won’t make it to the UK.

The pine tree lappet moth caterpillars feed primarily on Scots pine needles and have the potential to cause extensive forest damage.

Although widespread with negative consequences in continental pine forests, this moth was only identified in Scotland in 2004: it is still only found in small numbers there, and it has not been found to be destructive to its surrounding pine population. There is uncertainty as to whether the moth is a previously overlooked native species with an extremely restricted distribution or a recent arrival in Scotland – something that extensive DNA analysis by Forest Research has failed to determine definitively.

Nevertheless, with Scotland’s pine resource already under threat from several other pests and diseases, including Dothistroma needle blight (DNB), Forestry Commission Scotland has stepped up its precautionary surveillance, using pheromone lures in the breeding area and pheromone traps beyond, and has also implemented timber movement restrictions.

It’s another case of ‘watch this space’.