With more people than ever heading to the woods for weekend sport and fun, the risk of spreading tree pests and diseases grows. Here is our update on the main threats and tips on what you can do to help. 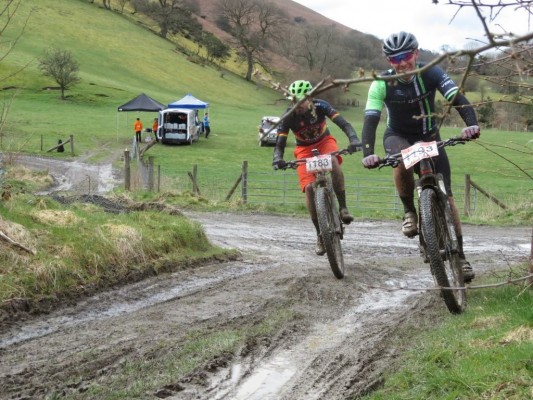 Pursuing a trend of home-grown leisure ‘experiences’, we’re visiting Britain’s wooded areas in higher numbers than ever. While this is, of course, to be encouraged, it has also come at a cost. People moving from park to copse to forest - whether on foot, bike or horseback - may inadvertently be transporting tree pests and diseases, helping them to spread at an unprecedented pace.

According to the Woodland Trust, 19 pests and diseases are currently attacking our native trees, and six of these have reached epidemic levels. While the prevalent vectors are wind, water and insects, human activity is escalating spread rates – and we can all play a part in combatting these threats to our woodlands.

The first thing is to be able to identify the threats. Top of the ‘alert list’ are four diseases and two pests. 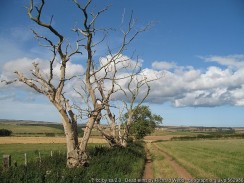 This disease has been the most devastating on British record to date, having been responsible for the death or pre-emptive felling of some 60 million elms in the genera Ulmus and Zelkova. It is caused by a member of the sac microfungi (Ascomycota) family and spread by elm bark beetles – typically in a downwards journey along the tree. Accordingly, the disease first reveals itself through browning and crisping leaves on the upper branches.

DED is still lurking in our woodlands, attacking young trees before they can get established, so continued vigilance is vital.

There is a new epidemic that threatens to put the spread of DED in the shade: Ash dieback (‘Chalara dieback of ash’). This serious disease is caused by a fungus called Chalara fraxinea which results in leaf loss and crown dieback. Symptoms include shoots with black and shrivelled tips, and dark lesions at their base that are long, thin and diamond-shaped. Leaves look frost-bitten, and small, white, fruiting bodies can be found on the previous year’s leaf stalks or rachis from July-October.

Usually fatal, it can kill a young tree in one growing season. Having decimated ash populations in the rest of Europe, including 90 percent of Denmark’s, it is now spreading rapidly through the UK, putting an estimated 126 million trees at risk. 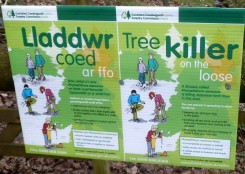 This fungus-like pathogen is related to those causing potato and holly blight. Indications include withered shoot tips with blackened needles and cankers that ‘bleed’ resin.

While it is associated with the contamination and subsequent felling of larch (Larix decidua) trees in the UK, it has a worrying ability to switch host. It has spread rapidly from the South West of England through southern Wales and up to Scotland, affecting not only larch but rhododendron and native bilberry (Vaccinium myrtillus). 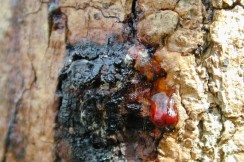 This disease is associated with the bacterium species Pseudomonas syringae pv. aesculi. Although it has been present in the UK for some 50 years a new, more virulent strain has taken hold over the past five years, infecting horse chestnuts (Aesculus hippocastanum) of all ages and spanning from the south of England to Scotland. It can be identified through extensive bleeding areas – largely on tree stems and occasionally on scaffold branches. 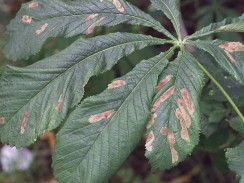 This little moth (Cameraria ohridella), just 0.5cm long, is causing enormous problems for horse chestnuts across Europe. Its caterpillars ‘mine’ their host’s leaves for food, gradually weakening the trees and making them susceptible to other diseases. Infected trees have brown-spotted, crispy-looking leaves that give an autumnal appearance by high summer and shed prematurely.

In the UK, this pest is spreading at a rate of 40-60 km/year – with the natural flight-reach of adult moths being greatly extended through carriage on visiting vehicles. 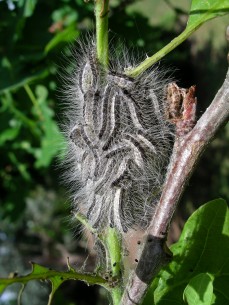 The caterpillars of this moth (Thaumetopoea processionea) form long ‘processions’ along oak trees to feed en masse, an activity which can rapidly and extensively defoliate a tree. They have been known to feed on hornbeam, hazel, beech, sweet chestnut and birch, too, although typically only when these species grow alongside severely defoliated oaks.

These creatures are not only harmful to trees: their hairs carry a toxin that is harmful to humans and animals. They travel on the wind and can provoke allergic reactions ranging from skin rashes to conjunctivitis and respiratory problems such as pharyngitis and asthma.

Others to watch out for

While still relatively contained, there are a couple of additional diseases on the high-watch list. 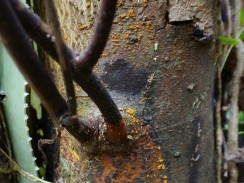 The most recent disease to flare up in the UK is the fungus known as chestnut blight (Cryphonectria parasitica). Symptoms include stem girdling - where the canker surrounds the stem and kills branches, causing them to wilt - and orange spores, sometimes with tendrils, in bark cracks.

While currently restricted in the UK to a small number of sites in Devon, Dorset and south east London, there is no room for complacency: the disease killed most of North America’s chestnuts (Castanea dentata) in the 19th and 20th centuries and is now widespread across the European mainland, attacking sweet chestnut (Castanea sativa). 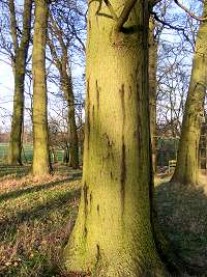 Another condition causing much concern is ‘acute oak decline’, which is characterised by black weeping patches in longitudinal fissures on stems and trunks that have underlying lesions and necrotic tissue.

This typically affects English and sessile oak trees (Quercus robur and Quercus petraea) which are more than 50 years old, but it has been discovered in much younger specimens. It is thought to be caused by a bacteria associated with a bark beetle, which particularly impacts trees already weakened by abiotic factors such as drought stress. Severely affected trees die within four to five years of developing symptoms.

Although robust trees can recover, the disease is on the rise and it is feared that not enough is yet known about it to prevent widespread decimation of Britain’s most iconic species.

What can you do?

By following these simple rules you can make sure you aren’t helping to spread any pests or diseases after a woodland visit.

JPA is one of just five officially-approved tree disease surveyors for Devon under Forestry Commission England’s Plant Health Framework. This elite network of qualified arboriculturists is called on to survey suspected outbreaks and help plan and execute any remedial action required.