To celebrate the granting of rights to a water supply in the 13th century, people of Tiverton take to the streets every seven years and follow the town's spring up to its source. JPA's Chris Hawley donned waterproofs and joined in. 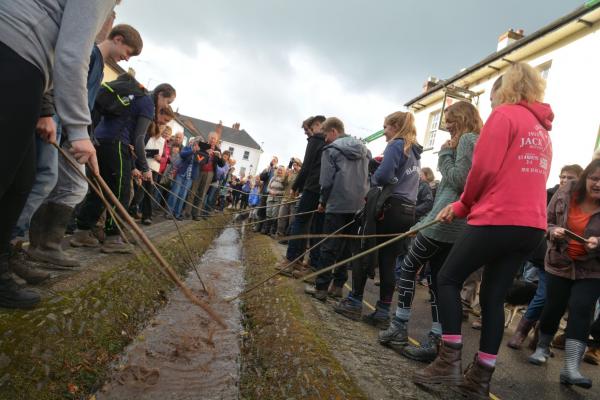 Never having perambulated the leat before, it was with slight trepidation earlier this month that we gathered at the site of Coggans Well in the town centre. But any fears we had about being over- or under-prepared were quickly allayed by the amount of hiking gear on display. Around 500 people of all ages had congregated to commemorate the seven-yearly event that marks the granting of water rights to the people of Tiverton by Lady Isabella de Fortibus, Countess of Devon, in around 1250.

Once the town crier had read the proclamations we set off, following the course of the leat as faithfully as possible. The procession has legal right of entry across private property so we passed through many charming gardens, alleyways and back yards normally hidden from the public gaze. The town crier repeated the proclamations at various significant points through the town, including where an aqueduct used to carry the water across the old railway line. Part of the tradition involved pupils from local schools beating the open section of the leat with sticks (known as 'Withy wands') as it passes through Castle Street (see pic above).

Once we reached the outskirts of the town our path diverted across fields towards Chettiscombe, where we we crossed the leat itself and gathered once again for the proclamations. After a brief tea and cake stop at the waterworks to maintain our energy levels, the route left the road and we began the climb across lush meadows and native woodlands while following the course of the leat that had by this point become a meandering stream.  The showery weather conditions made the going heavy underfoot but undeterred we perambulated steadily towards our goal, the source of the leat. Finally emerging on Norwood Common we were greeted by breathtaking panoramic views of the surrounding countryside - and a welcoming marquee full of real ales from Exeter Brewery, hot dogs, bacon sandwiches made from Landrake Farm outdoor reared pork and locally made cakes. Needless to say, pints were quickly quaffed and appetites satisfied before returning to Tiverton by the same path. We finished back in the town in the pouring rain, an appropriate conclusion as the whole tradition is all about remembering the need for water, how it gets to us and how essential it is for life.

Well done to Tiverton Town Council for keeping the tradition alive and all those who volunteered as marshalls (especially those providing food and drink...), not to mention the good-natured landowners/householders whose properties were momentarily invaded by several hundred perambulators!

For more pictures and information go to http://www.devonlive.com/news/devon-news/gallery/perambulation-leat-tiverton-2017-452661