A simple guide through the current pest and disease threats that tree owners and the general public in the UK need to be aware of.

While unprecedented levels of free travel and trade might have made it a more culturally interesting world, it has helped to introduce new threats to our trees, with pests and diseases spreading faster and wider than ever before. In the first of a two-part round-up designed to keep you up to speed on developments we summarise the main current threats. 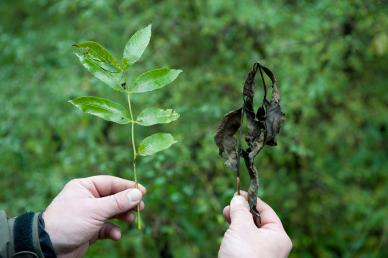 Ash dieback (‘Chalara dieback of ash’) is a serious disease caused by a fungus called Chalara fraxinea which causes leaf loss and crown dieback. Usually fatal, it can kill a young tree in one growing season.

It was first reported in Poland in 1992, and has since devastated ash populations in Europe, most seriously in Denmark where some 90 per cent of ash trees have been affected. We’re still waiting to understand the full impact this will have on the wider environment, particularly on dependent insects and fungi.

The disease was first noted in the UK in 2012 when a Buckinghamshire nursery received an infected consignment from a Dutch nursery. Whether carried by wind, vehicles, people or other infected imports, it subsequently spread along the UK’s Eastern coast before heading West, and 869 cases nationwide are now known to the Forestry Commission, including 451 in the wider environment.

Remedial action has included felling and pruning, plus burning, burying or composting of fallen leaves (infected dead leaf stalks are known to produce spores during the summer months). Ash movement has been restricted and there is a moratorium on the planting of new ash, since the most recent outbreaks have predominantly been in young plantings.

A nationwide screening programme and a £2.4m research project are underway to try to better understand this disease. Until then, it’s a case of wait and watch. 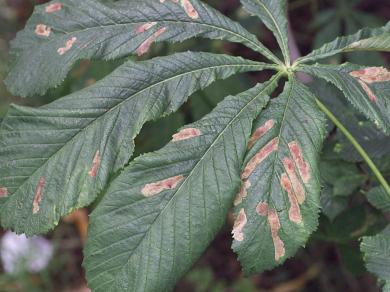 The problem is that it lays its eggs on horse chestnut leaves, and when the caterpillars emerge they ‘mine’ the leaves for food. In serious cases, this activity dries and browns the leaves so they are unable to produce essential sugars for the tree. While not immediately fatal, if this occurs repeatedly year on year, the weakened tree will eventually succumb to other diseases.

There is an amenity issue too, with the affected canopy of these popular garden and parkland trees turning brown by July and ‘crispy’ by September.

The first UK reporting was in Wimbledon in 2002. It has since spread at a rate 40-60 km/year - similar to that seen on the continent. It is thought that the natural flight reach of adult moths has been greatly extended through carriage on visiting vehicles.

The pupae appear to be exceptionally heat- and frost-tolerant, reportedly surviving -23C winters in Hungary, and populations multiply rapidly.

Proposed control options have included parasitic wasps and chemical insecticides. However, the predation levels appear to be just 1-8 per cent where wasps have been observed in the leaf miner populations, and insecticides are clearly problematic in the often urban environs of horse chestnuts.

Until more is known, the most effective action has been the removal and destruction of fallen leaves – although this is problematic in that it could also decrease the habitat of the disease’s natural control agents. Clearly, it’s a battle far from won yet. 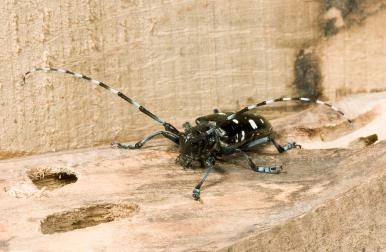 The boring activities of the larvae of this little native of China and southeast Asia also weakens its host victims. However, unlike the leaf minor, it isn’t fussy: it will feed on the wood of any broadleaved tree, making it more problematic to identify and tackle. Signs to look out for include the borer’s exit holes with ‘sawdust’ around the edge, or collecting below.

The beetle was first discovered on our shores in Kent in 2012, probably having been transported via untreated wooden packaging crates.

This outbreak is thought to have been controlled by prompt felling measures.

However, we’re still at the information-gathering stage in the UK. There is a legal obligation, under the Plant Health (Forestry) Order 2005, to report the beetle or suspicious signs of it, and movement of plant, logs and wood from infected areas is subject to statutory controls. Importers, in particular, should thoroughly inspect wood and wood packaging they receive from China or southeast Asia. This moth (Thaumetopoea processionea) is a native of central and southern Europe. Its caterpillars form long ‘processions’ along oak trees to feed en masse, an activity which can rapidly and extensively defoliate a tree. They have been known to feed on hornbeam, hazel, beech, sweet chestnut and birch, too, although typically only when these species grow alongside severely defoliated oaks.

While a tree will recover if not repeatedly defoliated, of more concern is the fact that the hairs of these caterpillars carry a toxin that is harmful to humans and animals. These hairs travel on the wind and can provoke allergic reactions ranging from skin rashes to conjunctivitis and respiratory problems such as pharyngitis and asthma.

There are three confirmed outbreaks in southern England, mostly in a number of the London boroughs; it is believed it may not be possible to eradicate the largest of these infestations.  Public bodies and major land owners are working together to control the outbreaks.

A Pest Risk Analysis (PRA) has concluded that oak processionary moth justifies being classified as a pest of phytosanitary concern and that the main pathway for longer distance dispersal is on live plants for planting, principally oak trees. The sale of oak trees grown in Europe is strictly controlled: trees more than two metres high must have an official plant passport certifying they are free from OPM.

In part 2... what's coming our way with the next wave of pests and diseases.