JP Associates (JPA) has sponsored our very own action man Chris Hawley in the 2016 Ride for Research, which supports research into sustainable treescapes. 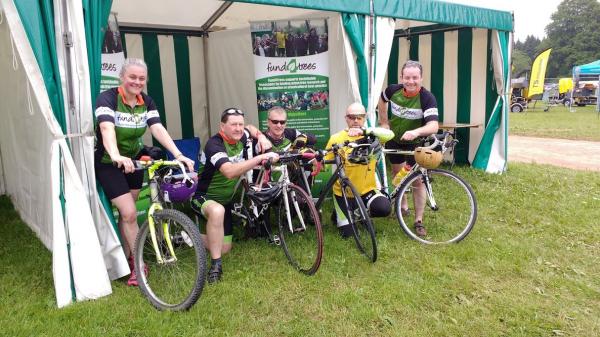 Organised by UK charity Fund4Trees, this annual cycling fundraiser sees professional arboriculturists and foresters riding to raise money to support UK-based researchers and scientists who are working to secure a sustainable future for trees in our landscapes (treescapes).

This year, the event was hosted at Westonbirt Arboretum to coincide with the Arboricultural Association’s Arb Show. The route covered 24 miles to the community centre at Cam, with the return including a muscle-burning 400m climb back onto the Cotswold plateau, which more than made up for the tour’s lack of distance.

As part of the event, the cyclists also undertake community projects. Chris (second from right) helped to plant a disease-resistant elm tree Ulmus ‘New Horizon’ at the GL11 Community Centre in Fairmead Gloucestershire.

This tree is fitted with a microchip in order that its identity and provenance will be verifiable long into the future.