PM hits the road in quest for DEBI Champion

From sustainable fishing to alternative technology training, to wildlife volunteering and environmental holiday activities - the finalists for this year's DEBI Environmental Champion award span an impressive range of subjects.

As co-sponsors of this year’s Devon Environmental Business Initiative (DEBI) ‘Environmental Champion’ award, JP Associates is delighted that its practice manager (PM) was also invited to take part in the shortlisting and judging process.

The DEBI awards are now in their 22nd year and are designed to recognise the contribution to good environmental practice made by individuals and businesses across Devon.

For this particular award we were looking for someone who goes that little bit further in their efforts to innovate, educate or campaign in the environmental arena – someone who can be said to be a true champion of a cause.

At Highfield Farm’s Green Oak Barn, a lovely eco-venue just outside Exeter, around 30 people including DEBI members and directors gathered in early October to whittle the shortlist of nine in each of the categories down to just four. And it was the four finalists for the Champion award that the PM, along with DEBI chairman Andy Vickery and former Environment Agency area director Richard Cresswell, visited on 16 October. 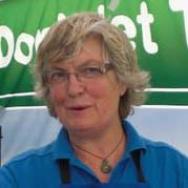 In a fairly hectic trip that encompassed Appledore, Paignton, Exeter and Exmouth, we met and interviewed four superbly committed people and some of their supporters. Felicity Sylvester was our first appointment in sunny Appledore: a one-woman champion of the South West fishing industry and a passionate advocate for locally sourced fish and shellfish. Felicity has been involved in the industry since the 1970s and is still as enthusiastic about it as she was then: she spreads the word about types of sustainable, alternative fish and how to prepare and cook it through her role as educator at Petroc College in North Devon as well as numerous appearances at community events and festivals. 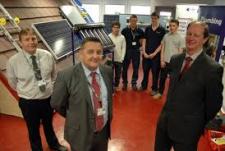 Next stop Paignton to meet Simon Friend, head of technology at South Devon College. Simon was the driving force behind the realisation of the South West Energy Centre (SWEC), a pioneering hub for training in the low-carbon sector that opened in September 2013. His ambition was to create a centre of excellence for teaching 21st century skills and his vision and dedication has helped to create an innovative addition to the college that welcomes students from age 14 up to those seeking CPD.  He has built up contacts in firms across Europe, as well as fostering excellent relationships with local businesses and communities and SWEC is now attracting interest from other colleges seeking to emulate the centre’s success. 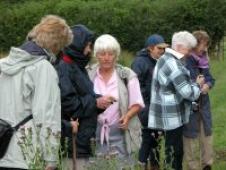 Joyce Dignam was our third finalist. As a volunteer with the Devon Wildlife Trust for an impressive 30 years, Joyce has been championing environmental causes for longer than most. Sadly we did not get to meet Joyce as she was not well enough to make it to the DWT offices but we spoke to her on the phone and to Trust staff who have known her some time about her lengthy involvement with the charity. She first joined the DWT in the 1980s after an inspiring visit to Halsdon. Since then she has been a torch-bearer for them, setting up what is now one of the most successful local groups (Barnstaple) and getting involved in many different causes with energy and enthusiasm. The creation of Uppacott Wood is considered one of her finest achievements – with help from her volunteer group she mapped out the patch of woodland and set about clearing paths and making bridges, clearing areas for wild flowers and surveying the wildlife. 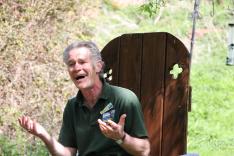 After a much needed cuppa we headed off to our last finalist – Brian O’Brien, park ranger at Devon Cliffs Holiday Park at Exmouth. Brian has forged a role for himself outside of his usual job remit that focuses on environmental issues and encouraging guests at the park, in particular the younger visitors, to enjoy and get interested in wildlife and outdoor activities. He has come up with myriad initiatives including the formation of a wildlife area and bog garden, an outdoor classroom, storytelling area, den area and a mini-amphitheatre. He organises nature walks, has established a Junior Green Team for children aged 5-16 which has taken part  in conservation events and has helped raise money for homeless people, an owners’ environmental task force and, most recently, has been asked by Haven Holidays to train 11 further park rangers.

He has an infectious enthusiasm for getting the environmental message across and his amazing and very positive feedback from holidaymakers and staff has not only brought him to the attention of Haven Holidays but can be said to have influenced the company’s attitude towards green issues.

So a worthy four finalists, each one a champion of their own environmental cause. Who would get your vote? Without descending into awards clichés, we made our decision. We applied the same thorough scoring method to all candidates and went through a pretty rigorous discussion of the merits of each. It was a hugely enjoyable day and a pleasure to meet such passionate, pioneering people.

The DEBI Awards is to be held at the Met Office in Exeter on 20 November. Watch this space to find out who won!