Moth with a sting in its tail? 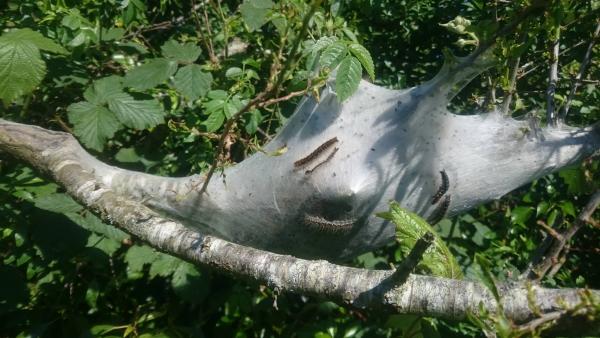 While the brown tail moth (Euproctis chrysorrhoea) is not officially declared a public pest, it has been steadily spreading west across the south of England, leaving in its wake numerous irritated hedge owners, veggie gardeners and sensitive-skinned people. The relatively benign adults are white with a small brown tuft on their tail. However, it is worth being cautious of their offspring for a couple of reasons.

Firstly, they overwinter in intricately woven, and surprisingly robust, communal silk ‘tents’ which resemble candyfloss (see above) that will typically attract the attention of children. Make sure they follow the ‘look but don’t touch’ rule, though: the urticating hairs on the larvae inside will irritate human skin and can even provoke a strong allergic reaction in some people.

Secondly, the larvae emerge en masse in late May, and then again in the autumn, as rather hungry caterpillars. These are identifiable by near-black bodies covered in bristly ginger hairs and chains of ginger and white spots, and a pair of orange-red ‘warts’ on their tail. These can denude their local hedgerows - typically protective prickly plants such as hawthorn, blackthorn and blackberry as well as plum, cherry and rose.

Thirdly, in rarer cases, the little beastie may progress for its dessert course to adjacent veggie patches or more ornamental trees or shrubs. Heavily infested plants will be weakened by the loss of foliage during the summer months, which can result in browning, poor growth and fruit production for several seasons.

Chemical sprays, bagging and burning are all control options for gardeners. However, we urge caution: spraying plants in flower should be avoided because of the danger to pollenating insects. As these moths are not known for returning to the same spot each year, and as the damage they cause is rarely extensive or serious – indeed, is often less damaging to our health than the control method itself - we would advise the more pragmatic approach for this particular pest of 'ignore and avoid'.