When the local tree officer requested a report on the state of a mature oak near a new-build in Bucks, JPA hit the road with its Arborcheck and soil compaction testing kits.

As one of just a handful of UK consultancies with the high-tech Arborcheck tree diagnostics kit, JPA was called to a pretty Buckinghamshire village recently to assess the health of a mature Oak following a new development.

The site, in the picture-postcard village of Padbury, had been home to a lovely English Oak for some 40 years. This had thrived despite a previous development of semi-industrial garages encroaching to within 1.5m of its base. These buildings had recently been replaced by a large, bespoke dwelling.

The foundations of the new building were sited further from the tree than the previous ones and, throughout the demolition and construction works, the developer had adhered to the various tree protection recommendations of his arboriculturist, such as protection fencing.

However, as the Oak is protected by a Tree Preservation Order (TPO), the Tree Officer from Aylesbury Vale District Council felt that the standard visual health check and dig compaction tests did not represent sufficient ‘due care’ of such a valuable tree, so he called for a more in-depth health assessment following the completion of the development.

JPA was recruited from the other side of the country because we are known for our use of the latest, high-tech diagnostic tools to provide deeper analysis of tree health. In fact, we were the first commercial arboricultural consultancy in the UK to use the sophisticated Arborcheck system.

This clever device allows us to read the intensity and nature of a tree’s fluorescence, and measure the foliar chlorophyll concentrations (greenness) in its leaves. Combined, this allows us to accurately assess a tree’s health even before there are any visible signs of stress. 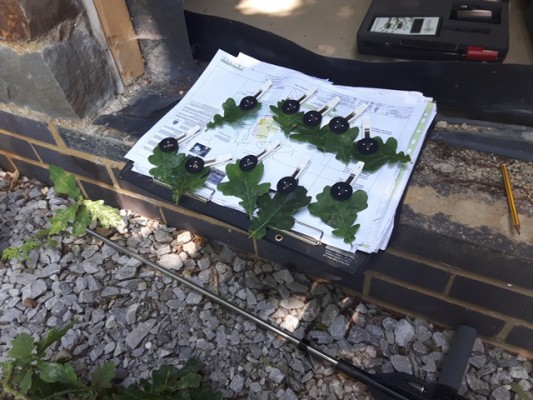 In this case, the Arborcheck helped JPA consultant Dan Vickridge to confirm that the Oak is generally of good vitality. It indicated it was suffering from mild physiological stress, but with the readings available to him - along with a couple of decades’ experience - Dan was able to attribute this to the prolonged period of dry weather rather than to any adverse impact by the development, and therefore advise the client that he could expect the tree to continue to thrive and grow.

Dan then used a penetrometer which uses a ‘traffic light’ system to indicate the level of soil compaction around roots. He found that there was a higher level of compaction where the historical build had been, but that the new-build had not contributed further to this issue. The Oak had adapted brilliantly to its environs to date, and exploited the better quality soil available to it to ensure robust growth.

This was not only reassuring news for the developer; it enabled Dan to advise precisely where some remedial soil aeration work could be undertaken to ease future root exploration, allowing the tree to maintain optimum health as it continues to grow.

He said: ‘The TPOs are there for a reason, and it’s really good to see one being taken seriously by both the LPA and developer. Potentially a tree like this could live for several more generations, but only if given respect, the right conditions and ongoing monitoring. With this work, that’s something we’ve been able to help the client set in motion, and we look forward to seeing the tree flourish in its lovely new garden environment and become a truly wonderful asset for the village.’

For more information on how the Arborcheck system works read here >>>