Kiss and tell: the story of midwinter mistletoe

Why do we only use the pretty, white-berried European mistletoe at Christmas? We look at the folklore and facts about this evergreen favourite. 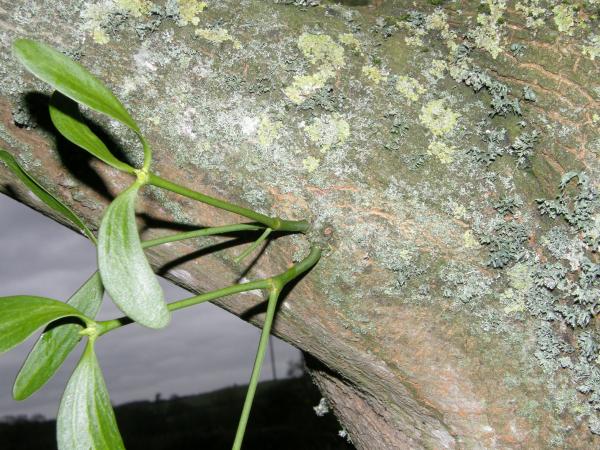 Just one of hundreds of mistletoe species worldwide, the white-berried European mistletoe, Viscum Album, is an evergreen plant that attaches itself to the branches of predominantly softwood trees. Known as a hemiparasite, it obtains water and mineral nutrients from the host tree, though it does carry out some photosynthesis (making sugars) of its own. In extreme cases it may weaken or even kill the host tree by shading the leaves or overburdening branches making them more likely to fail.

Although this European species grows on the widest variety of trees of any, its favourite domain is the cultivated apple tree – however around 90 per cent of traditional orchards in the UK have been lost over the past 30 years, drastically reducing its habitat. Other common host trees are poplar, hawthorn and lime and occasionally it will establish on the hardwood of an oak.

Many species of mistletoe form mini-ecosystems of their own, attracting specialist birds, insects and fungi. Only a few birds are attracted to the white berries with their gluey insides, with most drawn more to red, orange or black ones. Mistletoe is most notably associated with the mistle thrush and black cap. Both birds love eating the berries: the mistle thrush usually eats the berries whole and excretes the seeds while the black cap – the most effective at spreading mistletoe - picks out the pulp and skin, and wipes its sticky beak on branches to get rid of the seeds.

It is possible to grow your own mistletoe by harvesting seeds and attaching them to appropriate trees. The dos and don’ts of growing your own can be found at http://www.mistletoe.org.uk/mmatters/mistletoe.htm

Why do we associate mistletoe with Christmas? And where did the connection with kissing come from? For the answers we need to look to ancient fertility traditions, mixed up with a drop of winter solstice Druidic custom, topped off with a pinch of Victorian frivolity. As an evergreen plant symbolic of life and fertility, mistletoe – along with holly and ivy - was used by the Romans in their midwinter Saturnalia festivals and although there is some speculation about how Druids used mistletoe, it is clear that they valued it highly, particularly when it grew on ‘sacred’ oak trees: the mistletoe would be cut down with a golden sickle and caught before it hit the ground to preserve its special powers. Modern Druid groups still use the plant in ceremonies and the Mistletoe Foundation was set up in 2004 to rekindle interest in these customs. http://www.mistletoefoundation.co.uk/myths/index.html

The Victorians suspended mistletoe from the ceiling and by this time the fertility symbolism had been downgraded to a modest kiss – each time a kiss was given under the mistletoe, a berry would be taken off. When the berries had gone, your luck was out.