John and Pam Harding dreamed of creating a magnificent home in a tree-bound setting. But their project’s reality was riddled with arboricultural obstacles. JP Associates helped them navigate a safe passage through to the realisation of their dream. 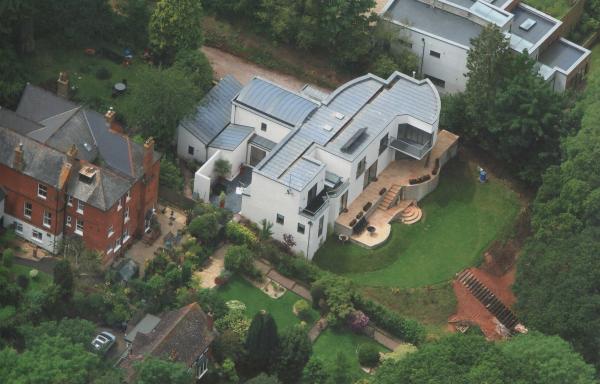 Following his retirement from the City, bank director John Harding encouraged his wife Pam to resume her own career as a house-builder. Instead of a quiet retirement to lawn bowls and knitting, they decided to embark on the creation of a magnificent new home for themselves in the South West on a Grand Designs scale.

When they found a large plot just 500 metres from the beautiful East Devon coastline, surrounded by mature trees and already with detailed planning consent, they thought their dreams had come true.

They weren’t at all daunted by the fact the site was in a conservation area, with a number of TPO-protected trees on the boundaries; they recognised that they’d have to jump through a number of planning hoops and were up for the challenge.

However, the marathon obstacle course that subsequently unrolled before them tested even their impressive mettle.

The test started with the need to re-submit development plans.

The existing planning consent was for a large house that copied the pervasive Victorian style of the area. However, the Hardings’ design by architect Will Goodall was for an unapologetically unique and contemporary residence that necessitated significant earthworks to reduce its visible impact from Green Wedge land to the north.

With the existing permission about to expire, the pressure was on to work through the arboricultural issues the new, more radical proposal would inevitably raise.

The Hardings recruited the well-respected local arboricultural consultancy, JP Associates (JPA), to conduct a standard BS 5837 survey, and advise the best protection methods and construction techniques to minimise stress on the site’s trees. Their recommendations were incorporated into the planning application.

Mr Harding said, ‘The trees were one of the plot’s primary attractions: the old oaks and ash not only look terrific, they encourage wildlife and provide a wind break that’s valuable in this coastal area. We were particularly keen to protect our 100 year-old medlar tree: medlars are intertwined with local folklore about the “little people”, and our new home was to derive its name from it. So it was important that we took our trees into account from the start. ’

Initially, this approach paid off.  The Planners were impressed by JPA’s detailed tree protection measures  and unanimously approved the Hardings’ application. .

However, the Hardings subsequently decided on a minor realignment of the driveway. ‘That’s when our obstacle race started to feel like a full military assault course,’ said Mr Harding.

The neighbours feared that the new drive would run too close to some of their mature pines, and impact their roots.

JPA was asked to evaluate the potential threat and commissioned an air spade to conduct a non-invasive survey and help determine the least harmful route for the new driveway. 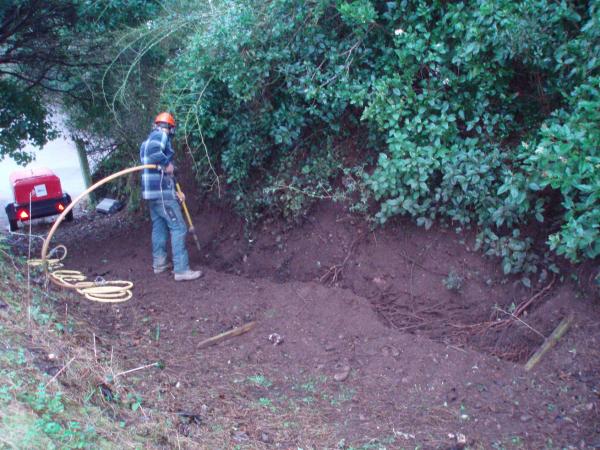 Unconvinced, however, the neighbours conducted their own survey. JPA was once again called in to provide expert opinion to satisfy the matter once and for all.

Mr Harding said, ‘As highly-regarded experts in their field, JPA brought real credibility and gravitas to the investigations which the Authorities respected, ruling in our favour.’

That wasn’t the end of the Hardings’ adventure, though. Wanting to retain the rich, fertile soil from the old kitchen garden, they arranged for it to be stored at the end of the site until their new garden was created. Although more than five metres from the protected boundary trees, the earth pile generated renewed objections from the neighbours. The closely observing tree officer, who was concerned about possible root compaction, insisted on remedial action.

‘We called on JPA’s expertise once more,’ said Mr Harding. ‘The soil was moved back and, in the presence of the tree officer, they conducted an air spade survey of the root systems and established that the protected trees’ roots had not been covered. Their sensible, consultative approach took the heat out of what was, by then, becoming quite a tense situation.’

With JPA’s help, the Hardings finally crossed the finish line and moved into their magnificent new home.

‘We love it, and we’ve had so many compliments from passers-by. The house is not only stunning but completely in tune with its natural surroundings. Some rooms are at canopy level, and make us grateful every day for the effort we put into protecting our lovely trees. And although our old medlar sadly succumbed to a gale, its young replacement is thriving,’ said Mr Harding.

‘It also reminds us how lucky we were to have quality advisors with a team ethos supporting us. JPA’s consultants are completely unflappable and straight-talking: just the sort of team mates you need to help you survive a development assault course. I’d recommend them to anyone.’

JPA’s consultants are completely unflappable and straight-talking. I’d recommend them to anyone